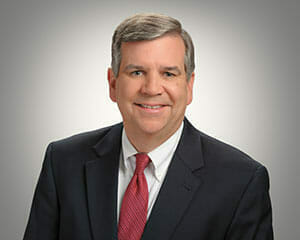 John P. Meadors is the criminal defense attorney for McWhirter, Bellinger & Associates P.A. with over 30 years of experience practicing criminal law in South Carolina. John has had vast experience on both sides of the courtroom; he has served as a prosecutor for over 30 years, and has handled thousands of criminal cases, including prosecuting over 100 murder cases. John has served as the firm’s criminal defense attorney since 2011. In 2005 John received the Ernest F. Hollings Award for Excellence in State Court Prosecution, and he has been named to the Best Lawyers in America.  If you have been charged with a crime, Mr. Meadors will help you obtain the best possible result from the justice system.

For twenty-three years, Mr. Meadors served Richland and Kershaw Counties as an Assistant Solicitor, First Assistant Solicitor, and Deputy Solicitor for the Fifth Judicial Circuit. He has also served as an Assistant Attorney General for the State of South Carolina where he handled major drug conspiracies throughout the state for over five years. Mr. Meadors went on to be appointed as a Special Assistant United States Attorney and was appointed by Former Governor Sanford to the state’s Child Fatality Review Board where he served for 8 years.

If you have been arrested for driving under the influence (DUI/DWI), drug possession, or are facing other criminal charges in the Camden, Lexington, Columbia, Newberry, Orangeburg, or Aiken, South Carolina areas, please contact the criminal defense team at McWhirter, Bellinger & Associates, P.A., today. It won’t cost you anything to see if we can help.™